Friendship is a powerful thing. It can help with healing the hurt, it can soothe the burn of daily living, and it can lift low spirits. A good friendship between two women is a bond unlike any other, but it wasn’t until I was in my 30’s that I truly realized how important female friends are to a woman.

When I was growing up, I had a difficult time fitting in socially. That was especially true with other girls. I have always been socially awkward and I tend to say too much too soon and so people tend to think that I’m weird. I have a huge heart though and I’m closely tied to my emotions, so I don’t give it much thought to just say what is on my heart and mind. It’s like my social filter is broken, or it was just never there to begin with. 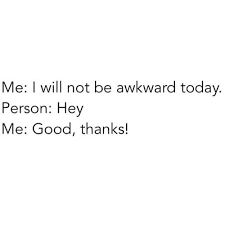 Me socially summed up

Do you ever meet someone and within minutes, you just know deep down that you and that person were just destined to meet? You know, when you talk and there’s an instant connection? It’s so very rare for me (and for most people I think), and it’s only happened a few times in my life ever.

I got laid off a couple of months ago from a job that I loved. It felt like the world was ending for me. How was I ever going to find something that was just as good with Monday through Friday business hours with only a year and a half of recent office experience? I live in a small area where jobs like that are fought over by even those with much experience. I was terrified that I’d have to go back to working in retail, and worse yet, have to go back to working two jobs just to make ends meet. I hated the environment where I worked, but I loved my job, and my family had become accustomed to my cushy, steady work schedule. I was determined to find something similar and so I only applied for new jobs that were in similar fields. It took 4 weeks to even get called for an interview. I was so nervous for many reasons. I sat in that group interview silently praying that they would love me and think I was the best person for the job. The company seemed great and while I would have to travel to get to work every day and the pay was lower than my last position, I just knew in my heart that it was “the one” for me. A day later, I was called and offered the position. I was ecstatic. My long, hard month of being unemployed was finally over. While my heart still stung from the loss of the job I loved, I was so happy and recognized my blessing of the new job. But I didn’t realize yet just how much I was blessed until my second day.

“K” was gone the day I started my new position. I began my training with the lady that was retiring and that I would be eventually taking over for. In the office, there are two older women, a male boss, myself, and K in her late 20’s. I was nervous because at my last job, I worked with all men. Would I be able to relate to other women in the office? Would I have a difficult time getting along with another younger woman? Would my social awkwardness shine through?

On day 2, my trainer was gone and I got to meet K and get some training with her. We talked on a personal level pretty much immediately. We had a lot in common and it took a total of 10 minutes for me to decide that I already was going to get along fabulously with her and that we would work great together. She told me a little about herself and everything she said, I could relate to. I felt weird for admiring her already and then really hoped I wouldn’t say anything stupid or do anything to make her wonder why I’m so odd. It’s not like when you meet someone you can just immediately be like, “I love your natural beauty and how your good heart shines through your smile and I love your laugh and the way you don’t seem to care what anyone thinks about you.” So I sat there largely silent at first and secretly texted my boyfriend and told him I’d met this amazing woman and that she is going to become my “work bestie” before she knows it.

A few days in and I could tell I wasn’t alone in feeling the connection between us. After a couple days we started to talk more on a personal level whenever the office was empty. That quickly led to talking outside of work. Within a week, I was then telling my boyfriend that K and I were going to become best friends, even if she doesn’t know it yet.

In just a few weeks, I’ve gained not just a job and not just a friend, but a best friend. The bond is tight and the laughs are many. I love that I already feel like I can talk to her about anything and she will listen and lack in judgment. I would do the same for her. Finding real people anymore is so difficult and I truly see how blessed I am for finding the friend in her. The loss of a job turned into one of the greatest blessings I’ve recently received. I’m happy at my new job and totally in friend love with K. I couldn’t ask for more.